Robots are your best employees. They do the heavy and repetitive work in no time at all, without ever getting tired. Numerous applications can be invented to make the cultivation and delivery potted plants easier through robotics and, in doing so, heighten your productivity. The great advantage of a robotic arm is that it can perform multiple tasks in a 3D field, such as putting plants in a carrier and, in the next movement, taking them out of a carrier and putting them on tables or in trays. This is performed with the greatest accuracy, even if the plants are not located precisely in the right place. WPS have the necessary expertise under its roof for programing robotic arms.

Smart Picking
The intelligent robotic arm picks up a complete row of plants from a trolley, adjusts the size of the grabbers and places the plants in the plant carriers of the WPS system. Each gripper is equipped with a sensor that detects the presence of the plant. The system is even capable of flawlessly picking up plants that are not neatly lined up in a row. The system is also equipped with a “fallen plant detector”.
Plants can subsequently be scanned by a camera (optional). If the plant does not satisfy the set criteria, it will be returned to the same robot, which will then place it neatly in a row on the trolley.

Degraplace is the collective name for mobile, self-propelled potting robots invented by Degramec.

The Degraplace system facilitates the automated picking up and setting down of potted plants to put down and pick up potted plants automatically. This is generally a very labor-intensive task. Degraplace robots therefore take a lot of work out of your hands. The robot makes use of a fork and guidance system, which enables the plants to be set down anywhere you want! Degraplace is suitable for almost every type of cultivation floor, including unpaved floors such as the Erfgoed floor. Because no two crops or nurseries are identical, Degraplace robots are always custom designed. The potting robot is suitable for a variety of purposes: from filling or emptying cultivation tables to filling or emptying an entire bay in one go. Flexibly deployable for multiple pot sizes and products
The flexibility of the Degraplace is demonstrated by the ability of nurseries with changing cultivation programs that encompasses multiple products and pot sizes to use the system with the greatest of ease. There are currently more than twenty-five Degraplace robots in operation. The mobile potting robot can be deployed for almost all standard pot sizes ranging from approximately 3½ inches to 16 inches in diameter. The Degraplace system offers maximum flexibility as it can be adjusted on the following criteria:

A perfect combination with SmartFlo
Interfacing the Degraplace with a SmartFlo system allows you to transport, space and pick up plants fully automatically. The combination of SmartFlo and Degraplace is perfect for nurseries seeking a significant reduction in labor costs and where automating other aspects such as container systems or then use of forklift trucks or the Walking Plant System is not a cost-effective option. 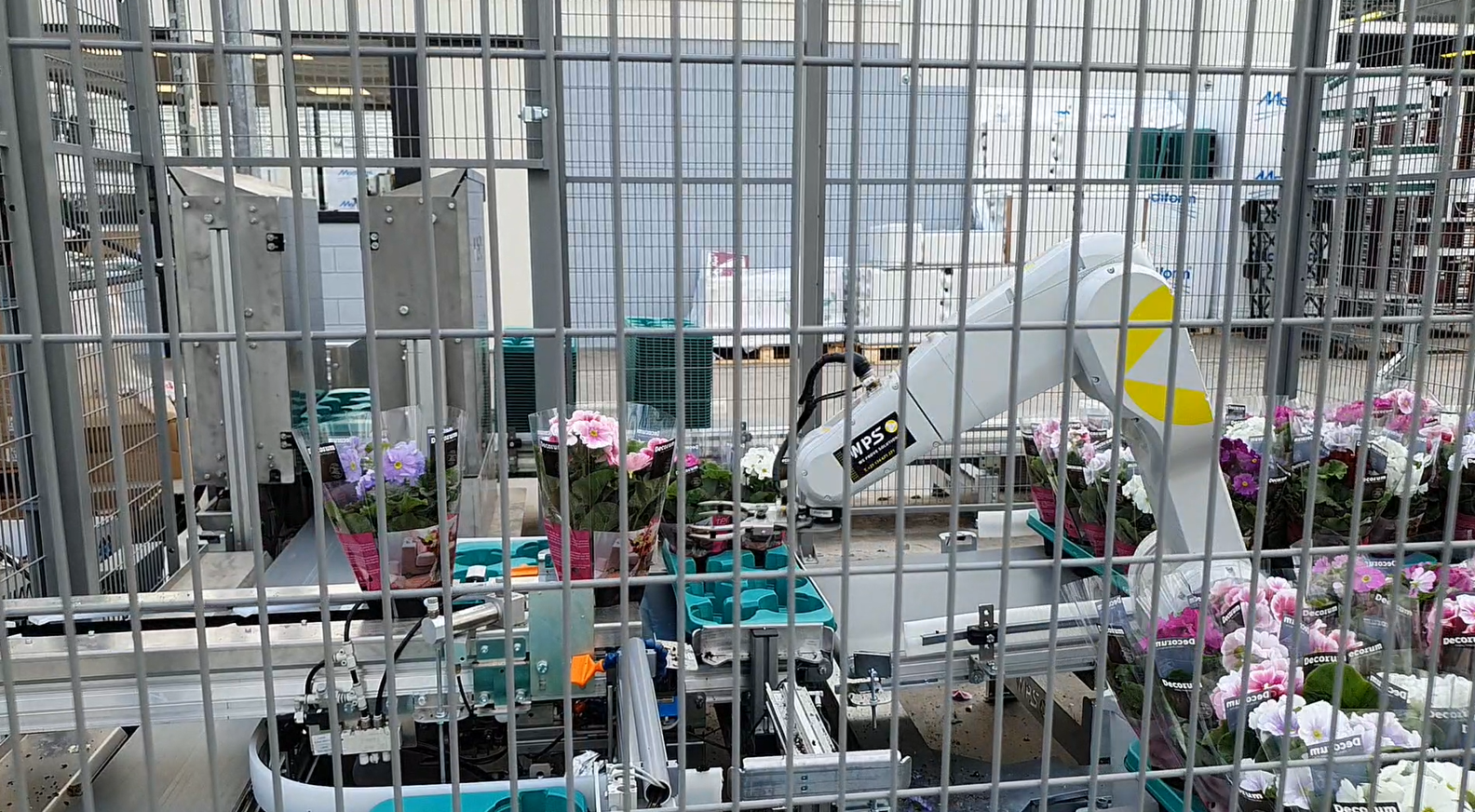 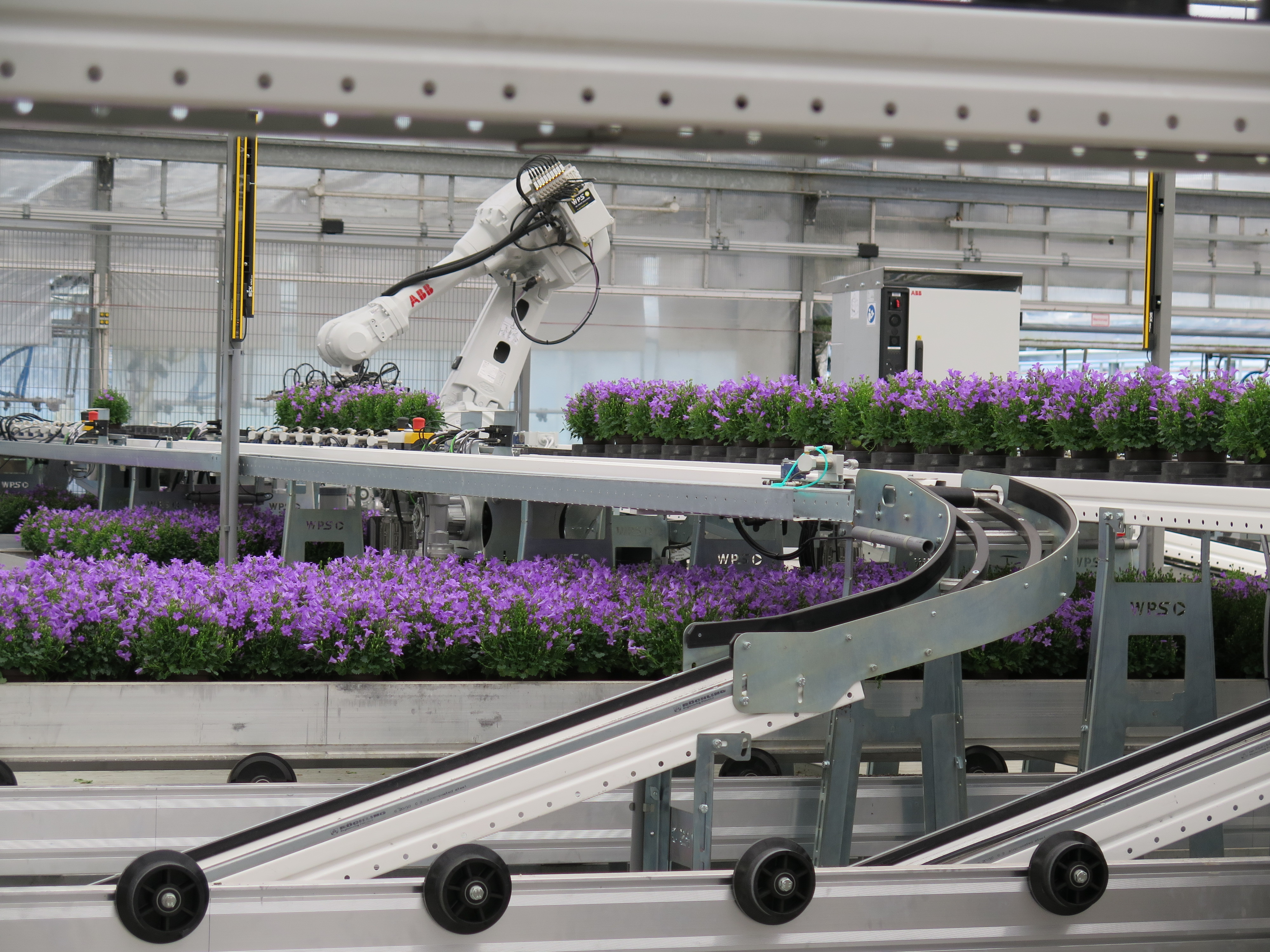